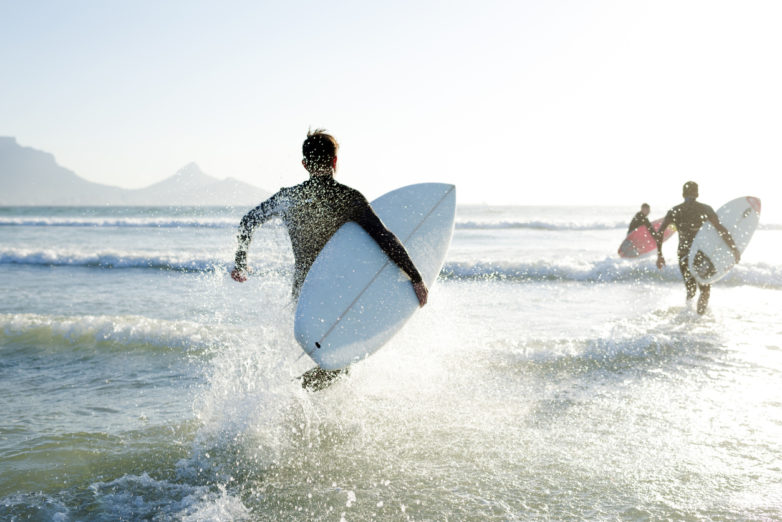 A short tutorial on a long subject

Luckily, we’re not as equipment-heavy as, say, skiing or windsurfing. You’re going to need:

A used board is generally your best bet when starting out. Chances are good that you’re going to ding it up just carrying it around. There are different types of surfboards.

Hopefully, this is nothing more than a bathing suit. But if it’s necessary, and you can afford it, a new wetsuit can be a pretty good investment. See the upcoming FAQ on wetsuits for recommendations.[Mary Ann Davidson / madavids@us.oracle.com / adds this tip]

As a hardcore surfette, I would add to your FAQ for the gals interested in surfing – stick to one-piece suits when starting to surf, unless wearing a wetsuit (in which case it doesn’t matter.) You can quite easily find yourself wearing a one-piece suit after a wipeout if you insist on wearing a two-piece suit as a novice.

Once upon a time, boards had no leashes. If you lost your board, you swam to shore. Only the best surfers could venture out to some breaks because losing your board could mean the destruction of you or your board. Surfers were stronger swimmers and more all-around watermen. It also meant that there were loose boards flying all over the place at some breaks.

For good or ill, those days are gone. Just a word of advice for the beginner: Treat your leash as if it were not there. Do not rely on it to always bring your board back to you. If the section you’re riding starts getting gnarly, pretend you’re going to have to swim to shore if you bail.

You can usually wheedle wax out of a surf shop owner if you buy anything there. Some surfers pride themselves on never having bought a bar of wax. If the deck of your board has some form of traction pad, you might not need the wax.

For those surfers living in areas other than Seattle or England, sunblock is often necessary – the net. wisdom on this is Bullfrog, with Aloe Gator also getting favourable reviews. Most of these can be found at your friendly neighbourhood surf shop.

IMHO, one of the most important things to have in learning to surf is someone to surf with. Aside from the obvious safety reasons (it cuts your chances of being eaten by a shark in half 🙂 ) a partner will give you moral support, keep you stoked when you get frustrated, keep you from sleeping in when its good, talk you into paddling out when it’s big and mostly be a friend.

There are two schools of thought here:

I subscribe to the second approach because that’s how I learned and because when one person is better than the other, someone is usually not having a very fun session. Don’t get me wrong, I really enjoy teaching people. But if it’s cranking on the outside, either I’m gonna be bored on the inside with the beginner, or he’s gonna be in over his head on the outside.[Ken Strayhorn Jr. / kes@acpub.duke.edu / accurately adds:]

Your friend you must choose carefully. He will become your brah, and over time will mean more than anyone else on this planet. Besides surfing, you will drink copious amounts of beer, smoke pounds of pot, and chase boxcar loads of women together. You will lend each other money when times are tight. You will never ask each other for gas cash. You will inform him when his ass crack is showing over his pants. If he doesn’t like the woman you are seeing you will drop her like a hot rock. Conversely, if your new woman thinks your brah is a jerk, that’s a sign that she’s a bozo and should be avoided.

Boards and wetsuits will be shared. You will hoot for each other on fine days. You will badmouth anyone who drops in on him. People will come to view you as a team. Surf nazis will avoid you because they know that to fight one of you is to fight both of you.

And, years later when you are 40 years old and you and your brah are sitting on a break somewhere listening to the younger guys yacking it up, you will smile and know deep in your soul that there is nothing finer than surfing and the people you do it with.

Finding a Place to Surf

Go to your nearest surf shop and ask people where a good break to learn is. Be honest about your abilities, surfers are a pretty friendly lot. Also, npecia 5 watch for the upcoming FAQ – “Where can I learn to surf without being killed, beaten, or eaten?”

Sit and watch the surf for a while. Watch what people are doing. Where is everybody sitting, where do they paddle out? Where do the waves break? As waves get bigger they break further out, so if everyone is sitting farther out than where the waves are currently breaking, it means that there are bigger sets coming. Watch for them.

Stretch. While you’re watching the break, stretch your arms and back. Limber up.

Getting in the Water

You’ve noted where other people head out. Wax your stick and head down to that spot. Put your leash on. (Digression: Decide whether you’re going to be a regular foot (left foot forward) or a goofy foot. Try both while standing onshore and see what feels better.) Put your leash on your back leg. Walk your board out until the water is about waist deep and hop on. Position yourself on the board so that the nose is just barely (2-3″) out of the water. Too little and you’ll be going under, too much and you’ll wear yourself out pushing water.

Go for nice, even, alternating strokes. When you have to get through the whitewater get up some speed and then either:

[By Morgan Perry / mpperry@u.washington.edu ]I have found a few things most helpful in my duck-diving:

A key is *not* to stay under for as long as possible, just to start deep and shoot up as far on the other side of the turbulence as possible. The sooner you get back up the surface and balanced on your board, the sooner you are able to start paddling again… and that’s the only way you really get outside anyway.

Once you get to where people are sitting around (in the water, if they’re on the beach, you’ve been paddling the wrong way 🙂 ) sit back and take it easy for a while. Watch what others are doing. A nice gesture is to say hello to the others in the water. This lets them know that you acknowledge their existence and will not run them over or drop in on them. Don’t be chatty though. A simple “Hello”, “Howzit”, “G’Day” or li’dat is fine.

This is the first of many hurdles in learning to surf. The wave knowledge – knowing which wave to paddle for and which to let pass, and the timing – when to start paddling, how fast, how much to arch your back, and when to get to your feet, are things that no one can teach you. They will come with time spent surfing.

One tip I will offer: when trying to stand up, stand up. Don’t get to your knees first, that leads to kneeboarding (A curable illness).[That said, Clark Quinn / cnquinn@cs.unsw.oz.au / graciously offers these tips:]

I’m not sure 2-4 are necessary (certainly not for someone who’s been in the ocean on other things, but probably are a good safety precaution.

Surfing tends to be pretty free form but there are certain accepted rules, mostly based on safety and common sense.

Wave Ownership (The My Wave Rule)

The person closest to the breaking part of the wave has the right of way.

Caveat: If someone is up and riding, paddling into the wave behind them does not give you the wave.

Also note: In many low-key breaks, the first person paddling for the wave owns it. Do not expect this to apply in crowded conditions.

Dropping In (The Thou Shalt Not Rule)

Dropping in is taking off on a wave in front of someone who is already up and riding. Don’t do this. Ever.No exceptions.

Paddling Out (The Eat It Rule)

When paddling out, if you must get over a wave that someone is riding, paddle behind them (On the white water side). This generally means getting stuff for the sake of someone else’s ride. Take comfort in the hope that they would do the same for you. Do not paddle in front of someone unless you are so sure that you will be 20 feet in front of them that you are willing to bet the well-being of your board/car/nose on it.

About 8 or 10 months after I started surfing I happened to write a little note on my blotter-style desk calendar:

As the months went by I continued making little notations. I kept the calendars, year after year. Now, I have a decade’s worth of blotter calendars stacked on my desk. Just looking at the notes can sometimes bring back the session in vivid detail. I usually would note the surf heights and who I surfed with.

If you’ve got a calendar, give it a shot. Years from now, if you somehow find yourself far from the surf, you’ll look back on some classic times spent with great people and say “Eh, mahalo Chrispy, shaka brah”.